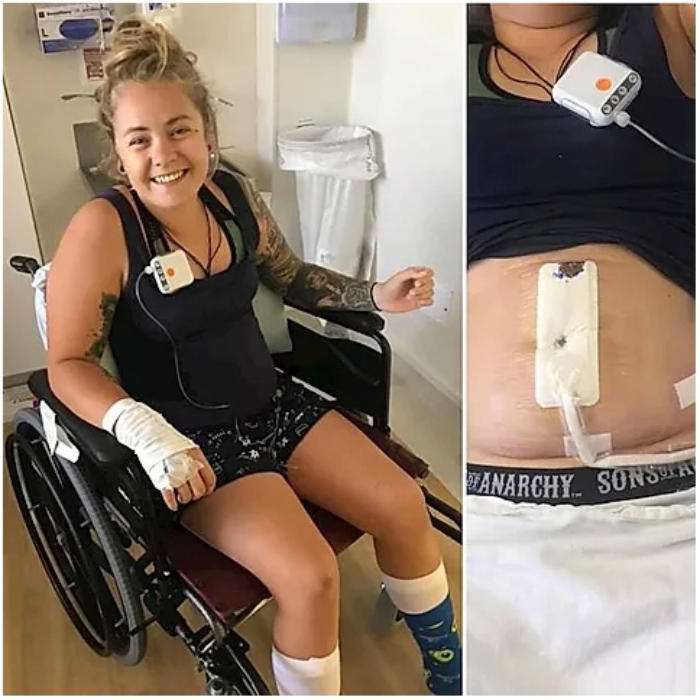 "My life feels pretty surreal right now, to be honest, I don't actually know how I'm feeling because I've been told all this stuff is wrong with me but I don't feel sick." Our brave Ambassador for Bowel Cancer Foundation Trust, 26-year-old Tegan Hollier (aka Chicken), from Massey in West Auckland hadn't noticed any symptoms only a pain under her left rib which prompted her to visit her Doctor. This led to a shock diagnosis of stage 4 bowel cancer with a 4cm tumour in her large intestine.

The bubbly and vivacious softball player had a CT scan on the 17th January to check the rest of her organs where they found a suspicious spot on her liver.

"Based on the biopsy they have already done they are 99% sure I have Lynch Syndrome too but with no family history that we know of (my mum was adopted and we don't know who her real father is so we assume it's from her side). On my dad's side, there is 40 of us from my grandparents and I'm one of the youngest, so they think that if i'm the only one to have presented with this, it's not likely to be from that bloodline."

Lynch Syndrome is a genetic condition that runs in families and is due to inherited mutations that affect the gene that corrects mistakes in our genes to stop us from getting cancer.

This hereditary condition increases patients risk of bowel cancer by up to 50% and is generally those who develop bowel cancer under the age of 50 years old.

On 7th February Tegan underwent surgery to remove 'Nigel the tumour + his lymph node mates.' Chicken is now excited to be home to partner Courtney Wooller and her stepchildren Danyon, 13, and Kaleb, 9.

Tegan Hollier with partner Courtney Wooller and her stepchildren Danyon, 13, and Kaleb, 9.

"I'm glad the first step is done. They couldn't get it with keyhole surgery so they had to open me up and that just makes my recovery a little bit harder but that's ok. I lost a lot of weight in the hospital because I wasn't eating while waiting for my bowels to wake up. On day 4 I was like a new person I had my appetite back and everything started working so I got discharged on day 6."

Tegan now has to undergo 3 months of chemo plus an MRI to further investigate the liver.

"They didn't manage to get it all though because some of the lymph nodes were too close to the main blood supply so i'm really hoping chemo knocks that.

"Not driving and being stuck at home has made me a bit mental.

"I'm not a take it easy type of person either but I'm going to force myself to get the go-slows and not push too hard. The next step for me now in the short term is to recover from the surgery. I have an MRI to check in on my liver and i'll start chemo in 4-5 weeks.

"I am absolutely overwhelmed by the kindness and generosity people have shown me so far! Friends, family & strangers doing what they can to help me & my family through this tough time. If I haven’t thanked you personally yet, it is coming. Slowly making my way through everyone who has donated to tell you how truly grateful I am!"

"I also want to thank the Bowel Cancer Foundation Trust for the Rehab sessions to help me back on my feet. They've been such a great help and a real asset to have on my side."

Tegan is urging people to be more vigilant with their health. She urges others – especially young people – to be more accepting of the need to visit a doctor.

"Those little niggles you have, you can't just ignore them."

A givealittle page has been set up to support Tegan, her partner Courtney and step kids Danyon, 13, and Kaleb, 9, as it's not yet clear how long she'll be off work.

Chicken isn't entitled to any sickness benefits, despite the couple predicting a $200 weekly shortfall while living off only Courtney's wage. Any amount you can donate to help with Tegan's costs will help her and her family fight this unfair battle.

Lynch Syndrome was originally confirmed but now inconclusive and she must retest in 5 years time. This syndrome means her body doesn’t recognise cancer cells, so traditional chemo won't potentially work and is now not an option.

Instead, Tegan needs the drug Keytruda. Keytruda is an immunotherapy treatment & will work alongside her own immune system to fight the cancers. But Keytruda is an unfunded drug. In the eyes of the public health system, Tegan is terminal. So her life now has a cost. She needs $112k.

Message from Chicken: “I’m not one to put my hand out, but i need shares, I need everyone to know my face, friends & family I NEED HELP!

Please help me get this message as wide as possible! If you don’t have a small amount to donate, please just give me a share 😊

Tegan to start the unfunded Immunotherapy drug Avastin alongside Folfox (chemo) to shrink the tumours to remove by surgery at a later date. Keytruda may be used at a later date but oncologists now think her tumour would respond better to Avastin. This all happened during COVID-19 lockdown in NZ which meant public health services could be delayed and treatment pushed back during these unprecedented times. Tegan decided to go privately using the funds she had raised through generous donations, enabling her to start treatment straight away and not allow the tumour to grow further. Each Avastin and chemo treatment came at a cost of around $6500 so every cent counted. Tegan will transfer to the public system to continue chemo treatment but Avastin will have to be given privately for its duration.

Tegan underwent a liver and lymph node operation at Auckland's Northshore hospital. Surgery took just 3 hours and surgeons were able to remove the lymph behind her main aorta that was previously a worry. The combination of Avastin and Folfox was so successful for Tegan's tumour type that they feel confident she is now tumour free.

Today Tegan was officially discharged from Northshore hospital after having cancer tumour removed and a portion of her liver that had been affected. Normally this type of procedure is a ten day stay but not for our Tegan. Tegan is so grateful to everyone who helped donate to her Givealittle page as without her unfunded immunotherapy treatment Avastin, she would not have been in this amazing position as quickly as she is. There will still be a lot of recovering to do with a bit more chemo to mop up and rehabilitation with Pinc and Steel after a few more weeks of rest at home. Tegan couldn't be happier with the result.