I'm glad I didn't end it all - a patient story 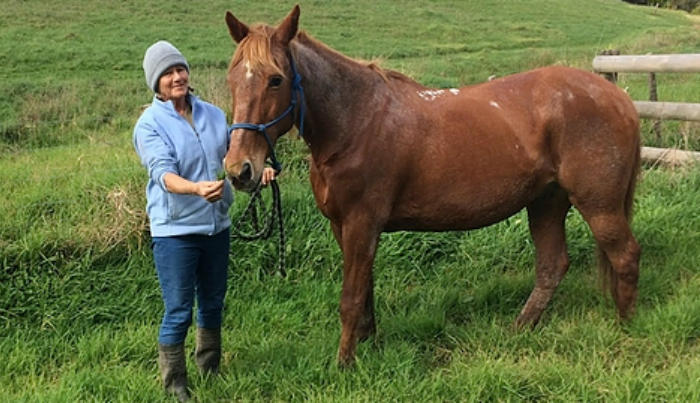 "I guess I was in denial and shock. I didn’t cry much, more wondering what I would do next. I spent lots of time on the internet but I didn’t really find any answers. All the technical terms were confusing and time-consuming trying to decipher and understand.

There were plenty of times I thought it would be better to end it all myself. It was the thought of all the pain for others I would leave behind that stopped me.

I don’t want to die in the horrendous pain I have witnessed other people go through. It’s not the dying that worries me, but what I have to go through before it happens.

In 2015 I had been running my own horse trekking business for 4yrs. The responsibility was huge and stress was a part of everyday life. It was successful and busy and I felt I had all the energy in the world, often having 5 or 6 hrs sleep per night and not always the best nutritional food. Unfortunately unbeknown to me I was living off my adrenals and stress.

Late in 2015, I noticed my bowel habits change. I was going to the bathroom more often than normal and on occasion, lacked control. In early 2016 I decided to go to my GP and I was booked for a colonoscopy. It turned out I had a tumour in my rectum. I had cancer.

A hospital appointment was made to see a surgeon. He proceeded to tell me about the surgery I would need and how they would remove the rectum and I would need an ostomy bag. This would possibly be temporary but may be reversed. I would firstly need chemo and radiotherapy.

Well, when the appointment was over I walked out of the hospital thinking NO WAY I’m having nothing to do with any of this!

I decided to stop the business and sell the horses. This was one of the hardest things I’ve ever had to do. It was like selling my family. I had many tears at this stage.

I read up a lot about diet and how you could heal your body yourself so I decided to go down that road. Juicing vegetables including wheatgrass, they were all foul-tasting and it was very depressing at times.

Eventually, I went back to my GP later in 2016. I could feel pressure in my rectum and I guess I knew it wasn’t getting any better.

She convinced me to at least do the radio and chemotherapy saying I could stop at any time I chose to. I think because the chemo was oral I wasn’t so apprehensive and radiotherapy didn’t scare me as much, probably because I didn’t really know anything about it.

"Psychologically I felt better knowing I was doing something positive about my situation even though initially I wouldn’t entertain the idea."

The chemo didn’t affect me at all. No nausea or hair loss. The radiotherapy was fine until the last couple of weeks. It burnt my skin badly and going to the toilet was hell. It was like peeing fire and pooping barb wire, and I was going about 20 times a day for both. It took about a month before there was some improvement.

By this time my wonderful GP had retired and I didn’t visit another doctor. I suffered it out alone which in hindsight was a shame. I ran into my old GP one day and she told me a few things which could have helped.

I had a further colonoscopy at the end of 2016 and apparently the treatment had worked and the tumour couldn’t be seen. I was told this was the best time to operate to make sure it was all gone, but again I declined any surgery. I chose the option to be monitored with scans and hoped it would stay away.

In September 2017 a regrowth was noted. Again I still declined surgery. Surgery was my worst nightmare, All my life I have said to myself I wasn’t going to let anyone cut me open for anything so it was probably ingrained in me to say no.

Again I tried the holistic approach, fasting for days on the water, meditating and juicing.

Early 2018 another scan, as well as a colonoscopy, showed there was even more growth and the cancer was now approaching my tail bone area. As the surgeon took photos during the colonoscopy, for the first time I could see the tumour for myself quite clearly. I knew that subsequent bone cancer was not good and would be very painful. I guess this was crunch time.

I had to think of my family who had supported me so much with everything and had wanted me to have the surgery from the start.

Of course, by now it meant I’d have to have more major surgery than if I had the surgery advised to me in the beginning and I would end up with a permanent ostomy bag.

I decided to go ahead with the surgery as I could see things would only get worse and was told if the cancer reached my sacral bone, my mobility could also be affected.

Before the surgery, I had many appointments with the surgeon and was told pain control was good and I would be educated on the stoma bags and all that goes with it.

NOT SO. As good as my surgeon was who did the best job anyone could have as far as the surgery was concerned, the rest was a terrible experience.

My morphine pump was removed within 38 hrs of a 6 hr major surgery by the pain control team. As little as 12 hrs later I was in excruciating pain. The pain control team were called in and an IV was put in and I was given intravenous pain control. The IV line was not the best and came out a few hours later of its own accord

You never question anything as you think you’re in good hands.

Another 12 or so hours passed and this time the pain was horrific.

At this stage with what I experienced I would be terrified to have another major surgery.

As for the education on the stoma. This area is extremely lacking. I was very fortunate to have done some caring for others in the past and had no real problems. The only so-called education I got was only once from a couple of very young nurses who weren’t really experienced in the matter.

I have since talked to others who have had the same experience. One woman told me she cried all the way home in the car because she just didn’t know how she was going to manage and cope with her bag.

What has got me through is knowing that I can support and help others in the future when I have recovered properly. I would have loved some help and someone to talk to who was in the same boat as me so to speak. Far more reassuring than a couple of teenage nurses who made me feel self-conscious and embarrassed about my situation.

As for myself now, I am doing ok.

In my last scan not long after surgery, it was noted my lymph nodes were enlarged. I have had a biopsy and it was diagnosed as low-grade lymphoma. Nothing to do with original cancer which was good news.

Apparently this is not so serious and it will just be monitored at this stage. I have been told many people have low-grade lymphoma and just live with it. If it gets worse they can give me chemo which it responds to very well. I will cross that bridge when it comes.

Living with a bag can be challenging. More due to the fact you never know, especially at first, when your bowel is going to move. I have been told this will improve as time goes on.

"Unfortunately it is a disability but no one would ever know unless you tell them. You look normal."

I am careful about where I go at this stage. I don’t go to crowded places because you always have to have the safety of good toilet facilities when you need them. It always feels safest in the comfort of your own home where you have everything organised and the privacy you need.

With time and experience and hopefully a routine with my new bowel, this will get better.

I am now on another course of oral chemo for a mop-up. I’m told it’s like an insurance policy, it covers any loose cells that might have escaped. So far no side-affects so fingers crossed it continues."

WHERE TO GET HELP:

Or if you need to talk to someone: