Insurance and Bowel Cancer - Are you covered? Charlie’s Story 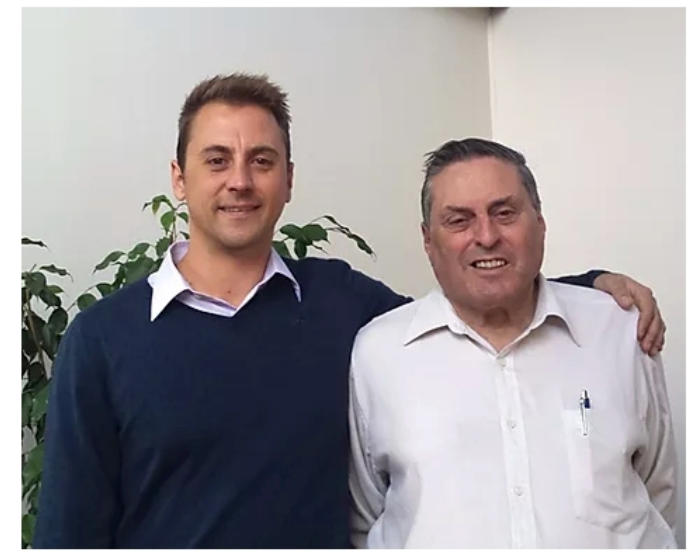 Charlie Gautier was a presenter on New Zealand’s first-ever TV Shopping Channel but started his working life in Finance and has been an Insurance and Mortgage broker for the past 12 years. His Dad was diagnosed with Bowel Cancer in 2009.

This is his story…

I was standing in a room once at an insurance meeting and they pointed out that one in three people in the room will get cancer. Everyone gave a nervous laugh and started looking around as though they could spot who those unfortunate souls might be.

It’s amazing how something happening to you, or someone close to you can prompt you to really sit up and take notice. Up until then, it’s one of those “it won’t happen to me” scenarios. Now I realise that in all seriousness, the likelihood is it probably will.

I remember visiting mum one day. She looked tired, stressed. She’s usually so happy and full of smiles, but that day something was wrong. Eventually, she told me that she was worried about Dad. He’d had to go to the doctor for some tests after he’d found some bleeding.

He was 70 years old when he was diagnosed, so he’d lived a pretty full life. But he was still working his business (because he wouldn’t know what else to do with himself!) and therefore was very active. Not a grey hair either, you would have sworn he was 60.

He only exhibited bleeding as I recall, but it was quite bad so he knew something was wrong. That’s what first prompted the check-up.

Since then my sister has had a test, and I’ve done a bowel screen test from the chemist. We’ve both decided to do them regularly, since my grandfather had it as well, so it’s very likely that we’ll get it one day too.

Initially, he underwent surgery to remove a small section of his bowel. Then he was to go on a course of radiation and chemo. I’d heard that could be the hardest part on the patient, but wow. I was not expecting what it did to him. When I walked in to see him at the hospital I thought he was his father, not mine. Eyes sunken in, his skin paper-thin and grey with sickness, hair as silver as any I’d seen, gone was the jet black. He’d gone from looking 60 and vibrant to looking 90 and dying.

It really dawned on me then that we might lose him. I was seriously worried. My Dad, indestructible, tough as nails, resilient as anything, reduced to a weak old man, almost overnight.

He had a short-term colostomy bag, while he recovered and they did follow-up tests and treatments to ensure they’d got it all. However during the surgery to remove the bag and attach the bowel again, the stand-in surgeon nicked the bowel, which later caused a very serious infection. This led to a requirement for further surgery, but because he was still so weak from radiation and chemo, he had to wait another 3 months for the surgery to correct it. This also led to further complications and resulted in the eventual total removal of his bowel, and a permanent colostomy bag being put in place.

Dad’s been given the all-clear now, thank God, though they say you never really know and it can always come back somewhere else. He’s been told he doesn’t have to do anything, but he’s started going to the doctor a bit more regularly now for standard check-ups!

This whole process ended up taking about 4 years, and it wore both my parents down immensely.

No doubt about it, it was super tough. Mum had it worst of all I think, as she was left to run around after Dad, and had to not only look after him and prepare his meals and empty his bag, but she also had to try and run the family business while he was stuck in bed.

She actually said the worst bit was all the walking back and forth from the kitchen to the bedroom. She thinks she must have walked hundreds of kilometres over the months and months of looking after him.

I think that’s something that most people don’t realise. When one of the family is struck down with a serious illness, it doesn’t just affect that one person. The whole family’s life is turned upside down, especially that of the spouse or partner. When I point this out to my clients, they really start to understand the benefit of having a backup plan to protect not just their incomes or hospital bills, but also their sanity! The actual illness is just a small part of a bigger picture that most people wouldn’t consider a factor until it actually happens.

I wish everyone realised what is out there that can help them through traumatic events like this. I was in a unique position to understand the insurance side of things that would benefit my parents.

Unfortunately Mum and dad had cancelled their policy about a year prior due to the rising costs. When you’re 70-odd with a low income, insurance is often unsustainable, which really sucks as it’s often at this sort of age that people really need it.

Obviously Life Cover can help if things are sudden, but that’s not going to help in the hardest time, which is usually immediately after diagnosis.

For that you can have Trauma Cover, which pays a lump sum upon diagnosis of many serious illnesses (including but not limited to cancers).

A lump sum benefit can be used for literally whatever you want. Obviously it can help to cover mortgage and rent payments, non-government-funded cancer treatments, tests and private procedures (if no medical cover is held), nursing care, etc, but if the diagnosis is terminal, then it can also be used to just enjoy the time you have left, tick off bucket lists, travel and experience new things, set up the family with a continuing income, the list goes on.

Income Cover is designed to cover your loss of income while you are off work due to illness or accident, and will pay a monthly sum until you’re able to return to work. This cover is great for covering mortgage costs daily expenses such as bills and groceries, and if combined with other covers such as Trauma, can really work to make a challenging time that much easier.

Health Insurance is another obvious cover for people who don’t want to wait on public waiting lists for treatment, or who want to have testing facilities available to them at a moment’s notice. This insurance can cover testing, treatments, surgeries and ongoing nursing or private hospital costs, and can be the difference between being able to access treatments that may work where others won’t. The cost of some cancer treatments, for example, can exceed $300 per day. If you have an insurer behind you who is willing to meet those costs, life can seem a lot less stressful.

It may be hard or impossible to get some of these covers if you’re right in the middle of treatment for cancer. However, if you’re in remission, or if you have a family history as I do, you may be able to get cover.

Most things to do with testing and treatment were publicly funded for Dad, which was great, so the biggest financial cost my parents faced was a drop in income with Dad not being able to work the family business. Luckily they had some savings and the pension which still came in regularly, but I dread to think what would have happened if it had come at a time when Mum was raising us and we were all so dependant on Dad for income.

Rehab can be a huge part of an insurer’s cost for their clients. Most insurers support rehabilitation heavily and will go to extraordinary lengths to get people back to their normal routine, including training people in new careers if their illness has meant they can’t continue in their current occupations.

There are also things like Post-Operative and Post-Hospital Care, and allowances that pay for someone to stay with you in the hospital if need be.

The biggest misconceptions are that all insurance policies are created equal. They most certainly are not, and in fact when you really sit down to analyse the differences, it’s downright scary. Some companies don’t include any cover for bowel disease, some companies won’t pay out on your insurance unless you claim within the first 30 days, some won’t pay out unless you submit a claim before seeking treatment. It really does pay to know what you’ve got in your insurance policy, which is why I always recommend dealing with a broker. It won’t cost you anything to get expert advice, but could save you piles of money, and maybe your life.

Firstly, don’t take any minute of their life for granted, you could lose them at any time. It’s not going to be easy for them or for you, but spend as much time with them as possible. If they’re gone, you’ll wish you’d given them more.

Secondly, I would offer as much support as possible to the spouse or partner having to look after them. Cook them some meals they can keep in the freezer, offer to do their washing, clean their house, babysit the kids, pick them up from school, do whatever you can to take everyday tasks away from them, so they can focus on the what really matters.”

Charlie Gautier, Founder of Innovest, is a registered NZ Broker specialising in Health and Life Insurances, including lump-sum benefits like Trauma and Disability Cover, and Mortgage or Income Protection.

If you would like to ask any insurance-related questions from someone who has experienced and understands the cancer journey please contact Charlie on: (022 657 6833) or email Charlie direct: charlie@innovest.co.nz